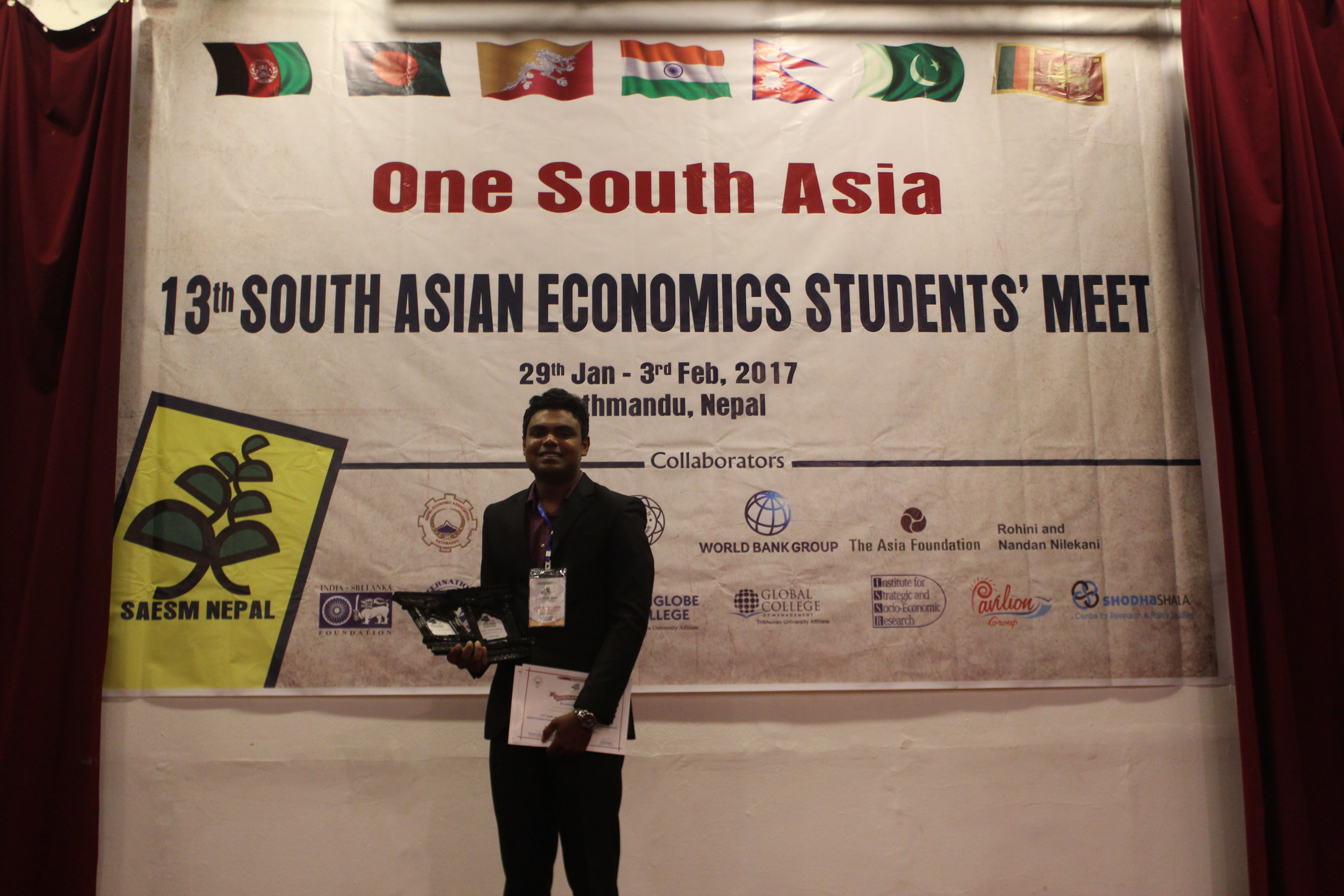 13th South Asian Economic Students’ Meet (SAESM) which was held in Kathmandu, Nepal from 29th January to 3rd February, 2017 brought great glory to Sri Lanka and to the University of Colombo with the exceptional performance of young economists.

13th SAESM was very special for Sri Lanka and it stands amongst the best SAESMs for the country thus far for the very reason of a Sri Lankan winning the Best Research Paper Award for the first time in the history of SAESM. It was Naveen Wickremeratne, an undergraduate who studies at the Department of Economics, Faculty of Arts of University of Colombo. He won the best research paper award named after two prestigious economists in South Asia, Mahbub Ul Haq and the Nobel Prize winner Amartya Sen. The best research paper amongst the south Asian undergraduates was chosen out of more than forty (40) research papers presented by undergraduates representing seven South Asian countries under six themes. Naveen, who is a final year undergraduate, competed under theme six ‘Infrastructure, Connectivity and Trade’ and his award winning research was titled ‘Impact of Infrastructure and Trade Openness on Economic Growth in South Asia – A Panel Study’. His research adopted a quantitative method using econometrics modelling to measure the impact on infrastructure and trade openness on South Asia and Naveen has developed an infrastructure index to estimate the impact of infrastructure on economic growth in South Asia.

In addition to the victory of Naveen, an undergraduate following Entrepreneurship and Management Degree Programme at Uva Wellassa University, Chathuri Nadeesha was the co-recipient of the award for best research paper under the theme four ‘Global Value Chains in South Asia’. Her research was titled ‘Diversification Strategies and Intra – Regional Value Chains: A Framework for Textile and Clothing Industry in South Asia’.

SAESM was a well-organized event with the aim of promoting regional integration in South Asia and event’s theme was “One South Asia”. Critical issues faced by the South Asian region was categorized under six (6) themes and were thoroughly discussed. Sessions held by the World Bank and other sponsors of the event provided updated information to the undergraduates. Diverse representation of different nationalities, different cultural backgrounds were properly managed by the organizers by allocating time to get familiar with each other and the cultural night clearly highlighted the pride of different nations. Nothing could beat the incredible experience of visiting the beautiful country Nepal.

University of Colombo is the Sri Lanka’s coordination institution for SAESM and Prof.Sirimal Abeyratne acts as the country coordinator. Sri Lanka had thus far had hosted SAESM few times successfully and had achieved great victories throughout SAESM history including wining the budding economist award. 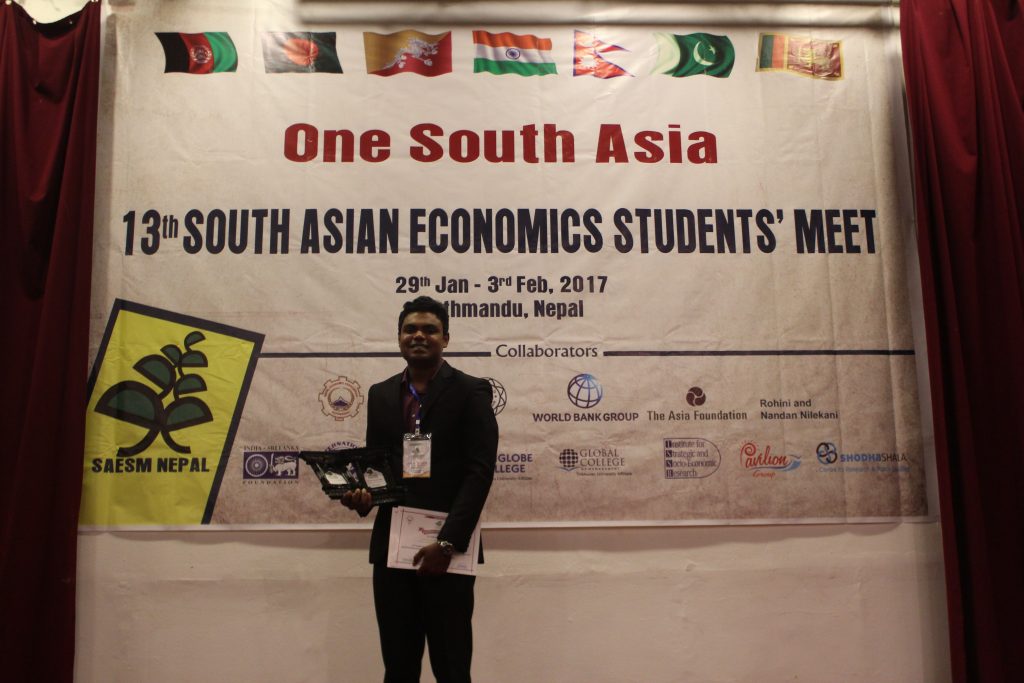 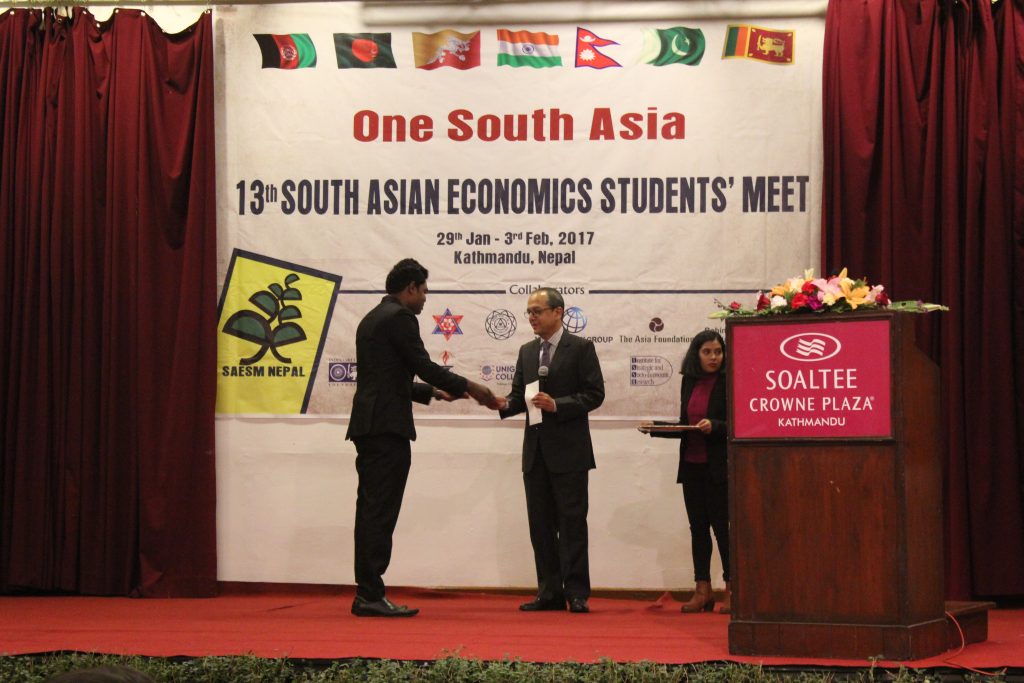 The Meeting of Board of Management 2021